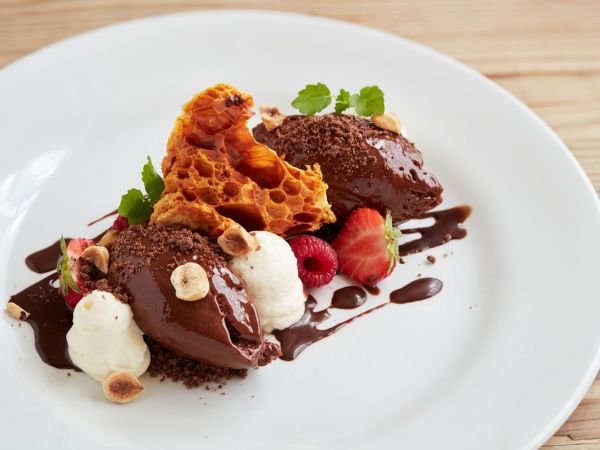 While exploring Marlow's Midsomer Trail you will come across a variety of award winning gastro pubs, micro breweries, unique farm shops and restaurants all serving delicious local food and drink. Using our guide below discover Buckinghamshire and The Chiltern's very best food and drink filming locations that have been featured in the hit TV show!

Sitting on the outskirts of Marlow in Bovingdon Green, where a few of traditional dairyman's cottages have appeared in the show – is The Royal Oak is one of Buckinghamshire’s great pubs. This traditional pub has really great food, expect delicious comforting meals with a modern twist that use local fresh ingredients to create unique dishes. You can also enjoy a selection of local beers, wines and spirits while you are here – including Rebellion Beer and Harrow & Hope Champagne from Marlow. You won’t miss their beautiful Teepee which sits in the pub's garden, you can even hire it for special events.

The Yew Tree at Frieth

Along from Bovingdon Green the next village to visit is Frieth. The Yew Tree offers great food using fresh ingredients that are sustainably sourced as well as tasty drinks served in a relaxed atmosphere. Frieth’s school has appeared in two episodes, where schoolteachers are suspects for murder! If you are looking for another drink at a really traditional English county pub, stop by The Prince Albert in Freith as well.

Take a visit to Lacey’s Family Farm in Bolter Green where a victim was found dead in the dairy in one of Midsomer’s episodes. Lacey’s won ‘Best Dairy Farm in the UK’ for their delicious cream from their Guernsey cows. As well as dairy products you can purchase some other local produce from their farm shop which includes a butchers and deli.

Next stop on the trail is Fingest where you can stop in at The Chequers pub, a hidden gem in the Hambleden Valley. The Chequers pub has been used in a number of episodes including, ‘A Silent Land.' and 'A Dying Art.' Described as the valley’s ‘best kept secret’ this pub offers a cosy atmosphere with simple but well executed fresh food.

On your way to Hambleden you will past Skirmett which is home to The Frog Pub. Not only can you enjoy delicious food and wine here but also stay the night in one of their three ensuite bedrooms. Nestled in the heart of the Hambleden Valley this pub has been described as one of the most successful and welcoming pubs in South Oxfordshire.

While you are in the Hambleden Valley you must visit the Chiltern Valley Winery and Brewery. Once used as a gin distilerry for Midsomer Murder’s episode ‘The Curse of the Ninth’ this old pig farm is now a very popular vineyard and brewery. Book a tour of the vineyard and brewery to learn the history and sample some of the local produce.

Before you return to Marlow, you can visit Danesfield House which sits on the outskirts of the town. Danesfield House Hotel has been filmed twice in Midsomer Murders appearing as Lawndside Nursin Home in 'Blue Herrings.' Why not make a booking to enjoy a delicious afternoon tea or catch an evening drink on their terrace as the sun sets. This is also a great place to stay where you can relax and unwind with their illumanti spa.

Arriving back in Marlow, your final pub stop off can be the Two Brewers Pub which has been used in several Midsomer episodes. Enjoy a celebratory drink from a variety of local beers and ales to finish off your Midsomer Murders Food and Drink Trail. If you are wanting to go out for a meal in the evening, Marlow is a hot spot for fantastic foodie places. There is The Compleat Angler, Butchers Tap, The Coach or The Hand and Flowers which are all fantastic restaurants if you are a foodie!